Why Your Home Is Not a Good Investment

While your home may be the single most important "thing" you may own, your home is not a good investment.

But, before I go on to explain why, I want to make sure that you completely understand that I'm NOT saying you shouldn't own your own home.

On the contrary. In fact, I STRONGLY believe that owning your own home is one of the most important benefits one can have in life - but, not as an "investment."

Let's keep in mind, that the issue being addressed by this article is the factual evidence that tells us why your home is not a good investment property.

Now, that we've got the issue clearly understood, let me provide you with some factual information about your home, and why it's not good as an investment.​

In order to determine whether or not your personal residence is good as an investment, we'll have to compare it to being used as a rental income property.

From the comparison of being your "Personal" residence and being an "Investment" property, we'll be able to see which use will ​provide the greatest overall profit at the end of the ownership period.

​Although we can use any ownership period for the sake of comparison (because it will provide the same conclusion), I've decided to use the life of the typical mortgage, being 30 years. Again, you can substitute any time frame you wish, and the factual conclusion (although, not necessarily the dollar amounts) will be the same.

3) Not pay utilities (except during periods of vacancy); and

4) Will pay more for certain maintenance expenses, such as landscaping, etc.

Also, be aware, that the "Investment" scenario contains an allowance for periods of vacancy and collection losses that are being estimated at an average annual rate of 5%.​

You should also know, that the expenses in both scenarios, as well as the rent for the "Investment" scenario, have all been calculated ​to represent the average annual amount over the entire 30 year term.

Finally, the category of reserves to pay for capital improvements over the holding period is based on replacing the following items during the 30 year term at their installed costs as follows:

​All of the information that I've just provided is summarized in the following graphic.

Take a look at it, and I'll meet you below.​ 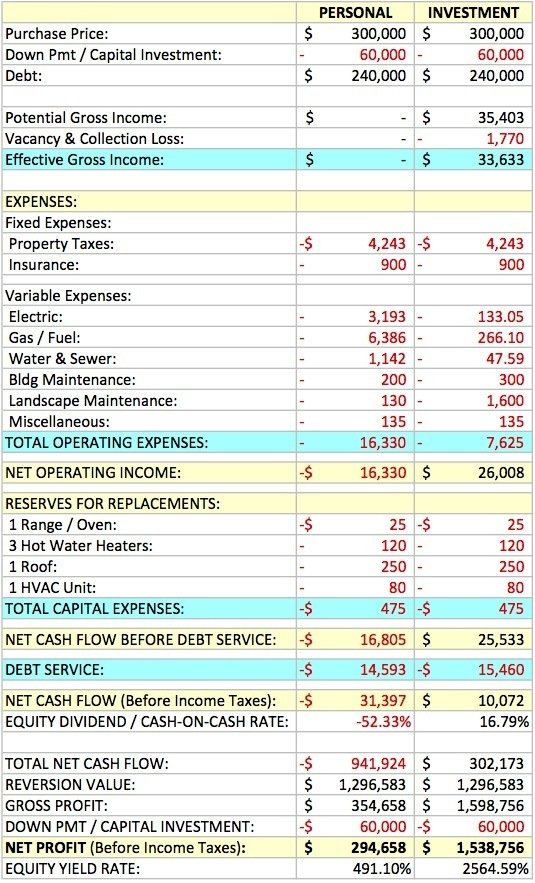 To briefly summarize what we're looking at, as we can see in the above graphic, at the end of the 30 year holding period, the "Personal" scenario has provided the owner with a net profit of $294,658.

Keep in mind, we're talking about the exact same property, with the only difference being whether it's used as a personal residence, or as a rental income property.

The reason for the great disparity between these two scenarios?

It's primarily due to the fact that the owner in the "Investment" scenario never made a single mortgage payment, never paid any property taxes or insurance premiums, and never paid for any of the maintenance or repairs - the tenant's rent paid all of those expenses.​ And, as a result of the rent being greater than the expenses, the "Investment" owner also reaped an annual cash payment on the average of $10,072.

Not too shabby, eh?​

You might also want to compare the "Investment" scenario to your favorite flavor of stock market investment, or other "paper" investment, because I already have which you can read about in my article, Real Estate is the Best Investment.

And, the cold, hard, fact is, owning investment real estate typically out-performs every other type of investment.

I imagine there are a few of you out there saying, "Well, you're not considering the discounting of the rental income, etc., etc. etc." And, you're right. That's because we're looking at the TOTAL overall return - not the PRESENT VALUE of the overall return.

The most important point of this entire exercise, is no matter how you look at it, there's no doubt, that your home is not a good investment. Period. End of story.​

Want some outside confirmation? Then, you may want to read this article by Jeremy Vohwinkle of Generation X Finance. (FYI - I don't know Mr. Vohwinkle and have never done business with his firm).

I understand that this can be a rather confusing issue to some people, and it's somewhat controversial with others. However, the facts are undeniable.

Even if my calculations were to be off by an unrealistic 50%, they'd STILL prove the same thing in the end, being, that your home is not a good investment.​

I'd really like to hear your thoughts and comments.​